Robert Buckley : The founder of the Marin brand.

Marin Mountain Bike was born in 1986 in the birthplace of American mountain biking, in Marin County, California. It was after a water skiing accident that Bob took up cycling to rehabilitate his knee. He doesn’t have a bike and goes to the shop next to his house. There he buys one of the first MTBs made by the Ritchey-Kelly-Fisher trio… It is on the advice of the mechanic of the store, who is none other than the competitor and champion Joe Murray. Bob was already in business with Asia for the trade in reptile skins. He decides to change and started on MTB which is a sport in full expansion. To design his future bikes, he asks the one who is an expert and advised him on his first purchase : Joe Murray. For the brand name, nothing could be simpler, the place where they ride : MARIN. For the names of the bikes, that of the trails where they ride : Palisade Trail, Eldridge Grade, Pine Mountain, Bolinas…

Joe Murray : An important man in the beginnings of Marin Mountain Bikes.

Joe had the double East Coast/West Coast culture, you should know that the bike geometries are different on both sides of the United States. The terrain and the weather conditions are not the same. The bikes he designs are versatile (angles of 71/73° which will be the benchmark for 20 years) and already incorporate slooping (top tube tilted backwards), which gives a more responsive MTB and room to move on the bike. He also collaborates with the TBG collective (The Bicycle Group with Kona, Brodie, Merlin, Fisher, Rocky Mountain). Joe is already involved in the development of the first titanium MTB with Merlin, he strongly believes in this material of the future. Joe convinces Bob to put a titanium MTB in the Marin catalog. Merlin, which is starting out, agrees to deliver its first 100 titanium frames to Marin. Following a disagreement between Marin and Merlin, the order was canceled and Marin had its frames manufactured by Litespeed in 1988. Marin will keep the Team Titanium until 1996 and will make an Anniversary series limited to 50 frames in 2008. 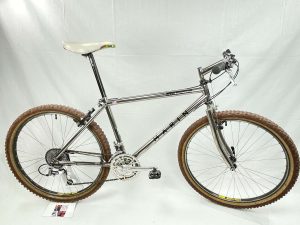 Marin 1990
Continue ReadingMarin 1990 #2921
We use cookies on our website to give you the most relevant experience by remembering your preferences and repeat visits. By clicking “Accept All”, you consent to the use of ALL the cookies. However, you may visit "Cookie Settings" to provide a controlled consent.
Cookie SettingsAccept All
Manage consent

This website uses cookies to improve your experience while you navigate through the website. Out of these, the cookies that are categorized as necessary are stored on your browser as they are essential for the working of basic functionalities of the website. We also use third-party cookies that help us analyze and understand how you use this website. These cookies will be stored in your browser only with your consent. You also have the option to opt-out of these cookies. But opting out of some of these cookies may affect your browsing experience.
Necessary Always Enabled
Necessary cookies are absolutely essential for the website to function properly. These cookies ensure basic functionalities and security features of the website, anonymously.
Functional
Functional cookies help to perform certain functionalities like sharing the content of the website on social media platforms, collect feedbacks, and other third-party features.
Performance
Performance cookies are used to understand and analyze the key performance indexes of the website which helps in delivering a better user experience for the visitors.
Analytics
Analytical cookies are used to understand how visitors interact with the website. These cookies help provide information on metrics the number of visitors, bounce rate, traffic source, etc.
Advertisement
Advertisement cookies are used to provide visitors with relevant ads and marketing campaigns. These cookies track visitors across websites and collect information to provide customized ads.
Others
Other uncategorized cookies are those that are being analyzed and have not been classified into a category as yet.
SAVE & ACCEPT